The question is the north or in the south ?  In the south in general you will have no problem with the weatherbut in the north it is a little more variable, maybe rain, spitting, occasionally a tropical downpour  or you could enjoy a splendid sunny week!  Heavy rain in the south is quite unlikely, especially for any length of time. 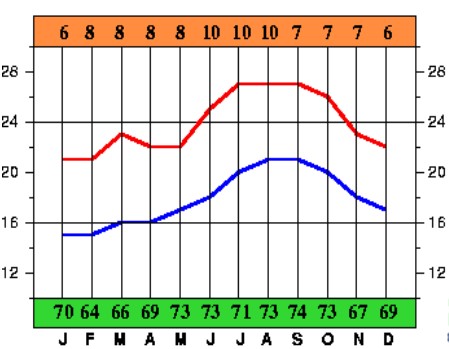 Max.temperature in Tenerife in February is 21 degrees with 6 hours of sun a day

With regard to clothing, it is advisable to bring lightweight, holiday gear, but don’t forget something warmer (jacket or sweater) especially if you’re moving around the island. One of the biggest surprises of the island is the contrast in temperature between one area and another so best go prepared. For example, if you go to La Laguna, do not forget to wear warm clothes even if you feel ridiculous coming out of the hotel in the south.

Rainfall in Tenerife in February 4mm over 2 days